Bulgaria rises one more time,gains Independence from The Ottoman Empire and fights in several wars to liberate all Bulgarians.

What We Are Proud Of ?

Bulgaria has had survived under the same name for over 13 centuries and had contributed to the culture of Europe.

The gold treasure from Panagyurishte according to trakite.info was found in 1949 two kilometers to the south of Panagyurishte. It is dated back to the end of the 4th and the beginning of the 3rd century BC . The treasure consists of an extremely beautiful set with rich decorations and ornaments. It was used in feasts or in libations and rituals related to the Thracian mythology. It consists of 9 vessels made of pure gold, weighing over 6 kg (13.2 lb).Four of the ritons are shaped as animals’ heads or torsos – ram, goat, and two of them have fallow deer heads. The upper part of the ritons is decorated with scenes and heroes from the Greek mythology. On one of the ritons are depicted god Dionysus with Ariadne (a Cretan princess) on the feast on the occasion of their wedding. Three of the vessels are jugs with Amazon heads. Their handles are formed as mythological creatures with animal figures and human heads.A skillfully made shallow bowl, called phial, is also found. There are four concentric circles on it, with 24 relief ornaments in each circle, which become smaller from the rim to the center of the phial. The biggest and the next two circles are arranged with Negro heads, and the last, most internal, circle consists of a row of acorns. Between the rows of elements the phial is decorated with floral ornaments.Most interesting regarding its form and decoration is the big amphora. Its handles are formed as fighting centaurs, and the two openings for pouring the wine, located at the bottom end of the vessel, represent Negro heads. Between the Negro heads is the figure of the child Heracles, fighting the snake. The amphora is richly decorated with realistic scenes from the Greek mythology.

Thracians were known as the best goldsmiths in the ancient world. 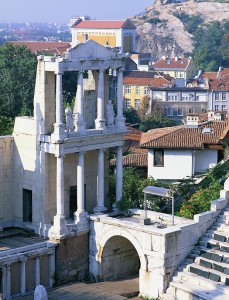 The Roman Amphitheater was constructed during the rule of Emperor Trajan- 2nd century A.C. It is extremely well-preserved and used to have rich decoration and could seat up to seven thousand spectators. After it has been thoroughly restored, today performances can once again be staged at the ancient theater and host many cultural events. 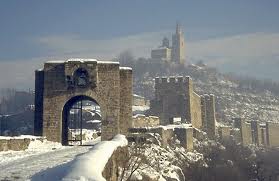 The symbol of Veliko Tarnovo is the fortress Tsarevets, which was  Bulgarian capital during the Second Bulgarian Kingdom, 1185-1393 year. Tsarevets is included in the list of the 100 national tourist sites of the Bulgarian Tourist Union.Tsarevets is solidly fortified with walls, which dominates the background of Veliko Tarnovo.  The two outer suburbs-Trapezica and Sveta Gora are formed along the Yantra River, which flows at the foot of the western and southeastern slopes of Tsarevets. In those medieval times between the 12th and 14th century Tsarevets was called even the second Constantinople  and was one of the largest fortified cities in Southeast Europe. 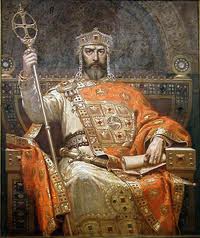 one of Bulgaria greatest kings.ruled over Bulgaria from 893 to 927,during the First Bulgarian Empire. Simeon’s successful fought against the Byzantines, Magyars and Serbs led Bulgaria to its greatest territorial expansion ever, making it the most powerful state in Eastern Europe. That was also a period of unmatched cultural prosperity deemed  as the Golden Age of Bulgarian culture. 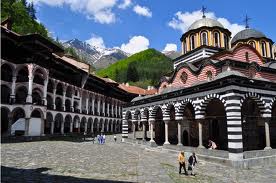 Rila Monastery was founded in the 10th century by St John of Rila, a hermit canonized by the Orthodox Church. It become a holy site and were transformed into a monastic complex which played an important role in the spiritual and social life of medieval Bulgaria. Destroyed by fire and restored the monument symbolizes the awareness of a Slavic cultural identity following centuries of occupation. Rila Monastery, the oldest in the Slav world and still the largest active religious center in Bulgaria. The monastery is on UNESCO World Heritage List. 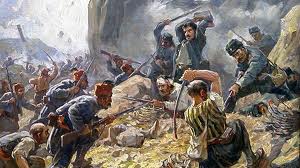 This land had seen so many battles as this one between Bulgarians and Russians against Ottoman Turks that was crucial for the restoration of Bulgarian state.Bulgaria is one of the oldest countries in Eastern Europe. The first to have been introduced to the Cyrillic alphabet in the 9th Century, the Bulgaria was also an early adopter of Christianity. These historical markers are significant turning points in Bulgarian history, and their remnants can be seen in the many Byzantine monasteries in Bulgaria.